Treasured for its white-sand beaches, crystalline lagoons, majestic coral reefs, and azure skies, the Maldives is a little slice of paradise in the midst of the Indian Ocean.

Much of the history of the Maldives is based around folklore and myth. One such folklore is about how the predominantly Buddhist Maldives converted to a 100% Muslim nation. It is believed that the present state religion of the Maldives, Islam is practiced today as a result of one man, a Moroccan scholar and traveler, Abu Barakaat Yusuf Al-Barbaree. Little has been written about the history of the Maldives and it is only through archeological findings that we know that Maldives was inhabited as early as 1500 BC, although permanent settlements may have been established around 500 BC.

The People
People of Maldives Island are very warm and friendly. Dhivehi is the main language spoken in the Maldives. Highly spiritual and dedicated, Maldives people have a great respect towards each other and outside visitors. When a newcomer visits a Maldivian island, the islanders always offer a cold coconut drink and a nutritious snack (usually tuna-based).

The Langauge
Dhivehi is an Indo-Aryan language predominantly spoken by about 350,000 people in the Republic of Maldives where it is the national language. Dhivehi is written from right to left and has a continuous written history of about eight hundred years. The English words ‘atoll’ (a ring of coral islands or reefs) and ‘dhoni’ (a vessel for inter-atoll navigation) are Anglicized forms of the Dhivehi words atolhu and dhoni. Other languages spoken in Maldives include English, which is also recognized as the second main language.

The Seamonster
The story of Abu Barakaat Yusuf Al-Barbaree is linked to tale of the sea monster, Rannamaari – a monster which demanded a virgin sacrifice every full moon until Abu Barakaat Yusuf Al-Barbaree saved the Maldives from its clutches. Although there are different versions of this story, it is a popular belief that it was this Moroccan scholar and traveler who brought Islam to the Maldives.
© 2019 Villa Hotels & Resorts, Maldives. All Rights Reserved. 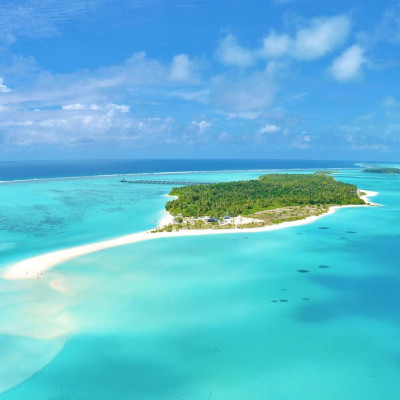